Liam Williams This is another awesome extension!!

AN IDEAL PARTING gift in many ways.

Ireland reminded themselves and their supporters of their quality in their final World Cup warm-up before flying to Japan by scoring three tries in a convincing victory over Warren Gatland’s Wales, moving into number one in World Rugby’s rankings as a result.

The victory also meant that head coach Joe Schmidt and captain Rory Best tasted success in what was their final game at the Aviva Stadium before moving on post-World Cup. 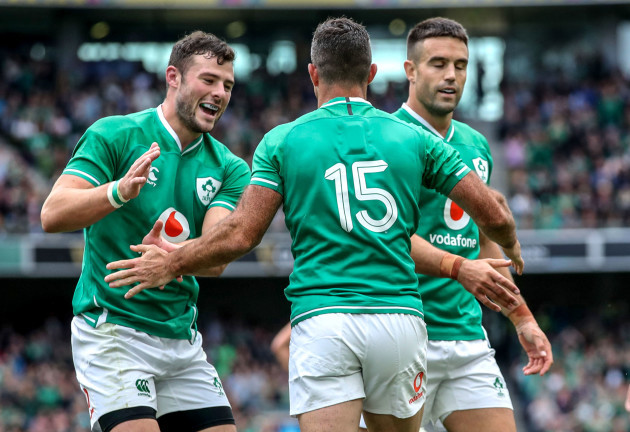 Best received a huge standing ovation as he was replaced in the 53rd minute of this impressive Ireland win, one that suggests that what happened at Twickenham three weeks ago was a genuine blip in the midst of a heavy pre-season.

Energetic and focused here in Dublin, Schmidt’s men delivered an outstanding defensive performance and clinically took their chances in the Wales 22. This was much more like the Ireland of 2018 and their head coach will hope it’s a sign of even better to come in their World Cup opener against Scotland on 22 September.

It wasn’t perfect against the Welsh, and a second-half injury to Keith Earls is worrying for Ireland. The Munster man was making his first appearance of the season but had to limp off, rejecting a lift on the stretcher. Cian Healy – just back from an ankle issue – was also forced off at half-time, seemingly due to a head injury.

More positively, Johnny Sexton enjoyed a positive 64-minute outing in the number 10 shirt as he made his return, while Robbie Henshaw was superb at outside centre in his opening run-out of the season.

Indeed, Henshaw’s powerful midfield partnership with Bundee Aki was among the highlights of the Irish performance, while the likes of Josh van der Flier, and try-scoring pair James Ryan – who was man of the match – and Tadhg Furlong impressed in the forward pack.

Ireland’s lineout had two early failings but, with Ryan calling, recovered to deliver some clean possession, as the scrum also provided a clean platform at important times in the contest.

Rob Kearney was the other Irish try-scorer in an assured showing at 15, while the bench

England vs Ireland, Rugby World Cup 2019 warm-up: What time does...