Finn Russell This is another astonishing ingredient!!

Gregor Townsend insists Scotland have never been stronger as they prepare to jet out for the World Cup at almost full strength.

Only the injured Sam Skinner and Toulouse lock Richie Gray – who turned down the chance to win a seat on the plane to Japan – were not available to the coach as he named his 31-man squad.

Townsend’s team have one final hurdle to overcome on Friday night as they complete their warm-up schedule against Georgia at Murrayfield.

But he will reduce the risk of picking up any last-minute bumps and bruises by handing a number of unlucky candidates who were overlooked for the tournament a consolation run-out.

And he believes with the majority of his top performers fit, Scotland’s jet out in rude health.

“We know and we’ve seen it as when we play to our best we are a match for any team in the world.

“How we defended and attacked against the top teams in the world we have won those games.

“We have a stronger squad now than we’ve ever had. We’ve never been in a better position over the last few years to play at our best.”

These addons are quite beautiful!! 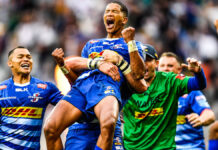 No ‘Going South’ for SA Rugby