Ben Smith These add-ons are glamorous!!

The All Blacks shift Beauden Barrett to No 10 for test against Tonga in Hamilton.

Luke Jacobson might be scrambling for more tickets for family and friends for his first test on home soil but the rookie All Blacks loose forward understands he can still tell off captain Kieran Read if he wishes.

The 22-year-old from Cambridge was on Thursday named on the bench for the Rugby World Cup warm-up test the All Blacks play against Tonga on Saturday at Hamilton’s FMG Stadium Waikato, the same venue where he cut his teeth for Waikato and the Chiefs before his first call-up to the national squad in July.

More than five weeks after his All Blacks debut in the 20-16 win over Argentina, Jacobson was the surprise pick in the 31-man World Cup squad named last Wednesday after only playing 23 minutes of test rugby in Buenos Aires.

However, the All Blacks have earmarked Jacobson, who has earned the nickname “concrete shoulders” for his punishing tackling, for a bright future in the test arena. There was no hesitation in selecting him for the defence of the Webb Ellis Cup in Japan after he played superbly for the Chiefs in his first two seasons of Super Rugby.

READ MORE:
* Barrett back at 10 for All Blacks
* How Crusaders took over ABs
* Tonga target ABs weaknesses
* RWC match schedule and pools
* How to watch Rugby World Cup

Now in coach Steve Hansen’s World Cup plans, Jacobson’s smile has stayed as wide as the Waikato River is long whenever reflecting on his first two months as an All Black. His concussion issues of the past 14 months seem to no longer be a concern after successfully returning to play for Waikato in the Mitre 10 Cup last month.

This is the fancy plug-in ever%sentence_ending 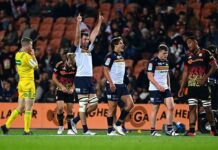