Alun Wyn Jones This is one clever addon.

By Will Kelleher For Mailonline

Rhys Patchell will start his first Test in 14 months at fly-half for Wales against Ireland on Saturday in the final World Cup warm-up match.

The back-up No 10 beat hopeful Jarrod Evans into the squad for Japan last week having performed well off the bench against the Irish in Cardiff.

And now he starts in Dublin, as Dan Biggar is protected from injury on the bench.

The 26-year-old has come off the bench recently, scoring a try last week against Ireland

This is the huge plugin ever%sentence_ending

‘I found a rugby jersey in a carrier bag and sold... 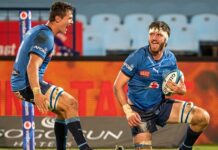