Ireland and Wales will smash into each other in the final World Cup warm-up of the summer, despite the lingering risk of cruel last-minute injuries.

Both sides are almost at full strength for the Dublin Test with Johnny Sexton and Robbie Henshaw in for the Irish and Wales picking Alun Wyn Jones, Jonathan Davies and Ross Moriarty who could have been protected.

Sexton will play his first Test of the summer on Saturday, whereas Wales have stand-in Rhys Patchell as their fly-half – leaving Dan Biggar on the bench.

Sexton has not played a Test since Wales beat Ireland for the Six Nations Grand Slam, and Patchell has not started an international since June 2018.

The head coaches Warren Gatland and Joe Schmidt chatted on the phone at the start of the summer, and decided that this match would be the one where they would play a strong side.

Ireland and Wales were in the final stages of sorting their World Cup squads last weekend, so that match was one where players were playing for places. 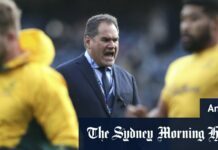 The Tommy Bowe interview: ‘I don’t miss rugby… it feels like...