My brother says this plugin is smart! 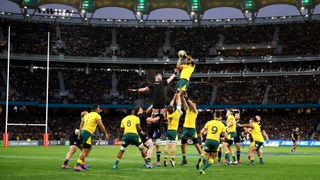 It’s not long now until the Rugby World Cup 2019 is underway so it’s that time of the year where all the world’s best union teams test their abilities in the warm-up games. This time it’s local neighbours New Zealand and Australia that will go head-to-head on the field. You can watch all the action and assess the teams’ form with a New Zealand vs Australia live stream and this guide.

New Zealand vs Australia – where and when

Today’s New Zealand vs Australia match will be played at Eden Park, Auckland.

Australia have already hosted New Zealand for the first leg of the Bledisloe Cup and now it’s time for the decider as the Wallabies head over to the All Blacks’ home turf.  And it’s the Wallabies who will go into the game on top, after beating New Zealand in the first leg, 47-26 in Perth. As such they’ve only made one change to the starting line-up for this next game as lock Adam Coleman replaces injured Rory Arnold.

On the other hand the All Blacks have decided to dump their wonder wingers Ben Smith and Rieko Ioane and centurion prop Owen Franks. If Australia can win at Auckland, for the first time in 33 years, they will return home with the cup. Having lost their last 22 tests in New Zealand, it’s a tall order.

As such this should be a very exciting, hard fought game, and you can watch it all where you are using this New Zealand vs Australia live stream guide.

How to watch the rugby from outside your country

Down below, there’s the local broadcast options if you’re in Australia or New Zealand, as well as the UK, US and Canada.

If you’re abroad this weekend and try to live stream the rugby online from your country’s broadcaster, you’ll be annoyed to discover that it won’t work due to geo-blocking. Thankfully, using a VPN service will allow you to watch today’s rugby union action no matter where in the world you are.

They’re surprisingly easy to use and have the double benefit of giving you an extra layer of security as you surf the web. There are lots of options, and we’ve tested loads of them – our #1 pick is ExpressVPN due to its speed, security and sheer simplicity to use. We also love that it can be used on so many operating systems and devices (e.g. iOS, Android, Smart TVs, Fire TV Stick, Roku, games consoles, etc).

Sign up for ExpressVPN nowand enjoy a 49% discount and 3 months FREE with an annual subscription. Or give it a try with its 30-day money back guarantee.

Or read more with our pick of the best VPN services out there today.

How to live stream the Wallabies in Australia for FREE

Fantastic news, Wallabies fans. This one’s being shown absolutely free on Network 10, with coverage getting started at 5pm AEST. That means you can also watch online at the 10 Play website or on your tablet or phone (both Android and Apple) via the 10 Play app.

Fox Sports Australia also has the rights to show this year’s Bledisloe Cup clashes with the All Blacks. It doesn’t come cheap, but there is a two week free trial if you want to give it a try before you buy.

Don’t have/want Fox? Your other option is to grab a more temporary sub from up-and-coming service Kayo Sports. It carries loads of sporting events and you can cancel any time. Kayo Sports Basic Package costs $25 per month and allows users to stream across two devices simultaneously. Alternatively, the service also offers a Kayo Sports Premium Package, which provides three concurrent streams for $35 per month.

The Foxtel Now and Kayo Sports apps means you can access this from your chosen device wherever you are (although you’ll need a VPN if you’re taking that abroad).

How to watch the All Blacks in New Zealand

There’s no free way to watch in New Zealand – Sky Sports has the coverage in New Zealand. For those without a subscription, free-to-air Prime will have delayed coverage of today’s game as well as each All Blacks match during the tournament.

If you’re looking to stream the coverage live to your mobile device, Sky Go is the service you need.

I be crazy about addons, because they are the fancy!!