Rugby I be mad for ingredients, because they are helpful!

THE CRUEL CUTS continued for Ireland yesterday, with Joe Schmidt having delivered the latest round of bad news to John Cooney, Mike Haley, and Finlay Bealham.

Schmidt reduced his squad to 40 as they travelled to Portugal for an eight-day training camp, bringing the injured Joey Carbery with them as the Munster out-half begins a rehabilitation process that the IRFU says will last between four and six weeks.

The three left behind – joining the previously cut Rory Scannell and Ultan Dillane – will naturally be devastated but Schmidt must go through the process of reducing his numbers towards the eventual 31-man squad he brings to Japan. 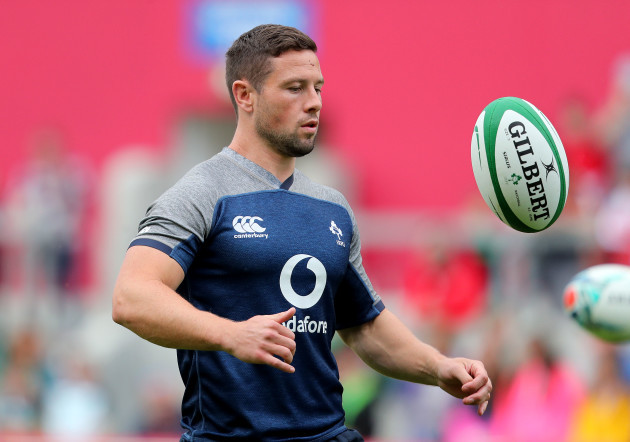 Cooney is among the latest players cut from Ireland’s World Cup training squad.

Cooney is unlucky after his strong form for Ulster in recent seasons and having featured off the bench for Ireland during this year’s Six Nations, but Schmidt has opted to move forward with Conor Murray, Kieran Marmion and Luke McGrath as his scrum-half options.

And thoughts that Cooney’s goal-kicking and potential ability to cover out-half would be useful in Japan haven’t dissuaded Schmidt from removing him from contention for now.

Murray is first-choice at scrum-half while Marmion has most often been Schmidt’s back-up preference in this World Cup cycle. McGrath’s 11 caps mean he edges out Cooney [8] in terms of Test experience, but it must still have been a tight call.

While Murray, Marmion and McGrath could all travel to Japan, there is also the possibility that Schmidt will bring only two scrum-halves, having done so for the 2015 World Cup when selecting Murray and Eoin Reddan.

There would, of course, be drama in getting a player out to Japan in the event of a

This is the elegant ingredient ever%sentence_ending

Finn Russell Ireland bounces back with win against Wales