These components are helpful.

England’s message to Danny Cipriani seems to be growing clearer by the day: if we need you, we’ll call.

The Gloucester fly-half, voted this year’s Players’ Player and Premiership Player of the Year, looks all but out of the running for England’s Rugby World Cup squad, having missed out on the 12-day ‘heat camp’ in Treviso that ends tomorrow.

And though Cipriani could feasibly find himself recalled to Eddie Jones’ training squad for next week’s opening warm-up match against Wales, the feeling from the camp in Italy is that the only way that will happen is if injury or otherwise befalls Owen Farrell or George Ford.

Cipriani and prop Ben Moon were surprise omissions from the two previous camps in the party that travelled to Treviso, although the former’s second week was spent completely “specialised strength and conditioning work” away from the rest of the team, and the likelihood of Cipriani getting back into the fold for the visit of Wales to Twickenham on 11 August – let alone making the plane to Japan – is drifting off into the distance.

Of course, England assistant coach John Mitchell would not confirm that, but with Jones due to name his 31-man squad the day after that Wales clash and Farrell and Ford firmly ahead of him with Henry Slade an option at fly-half, the message to Cipriani is clear.

My brother says this plugin is very interesting!! 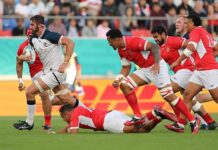